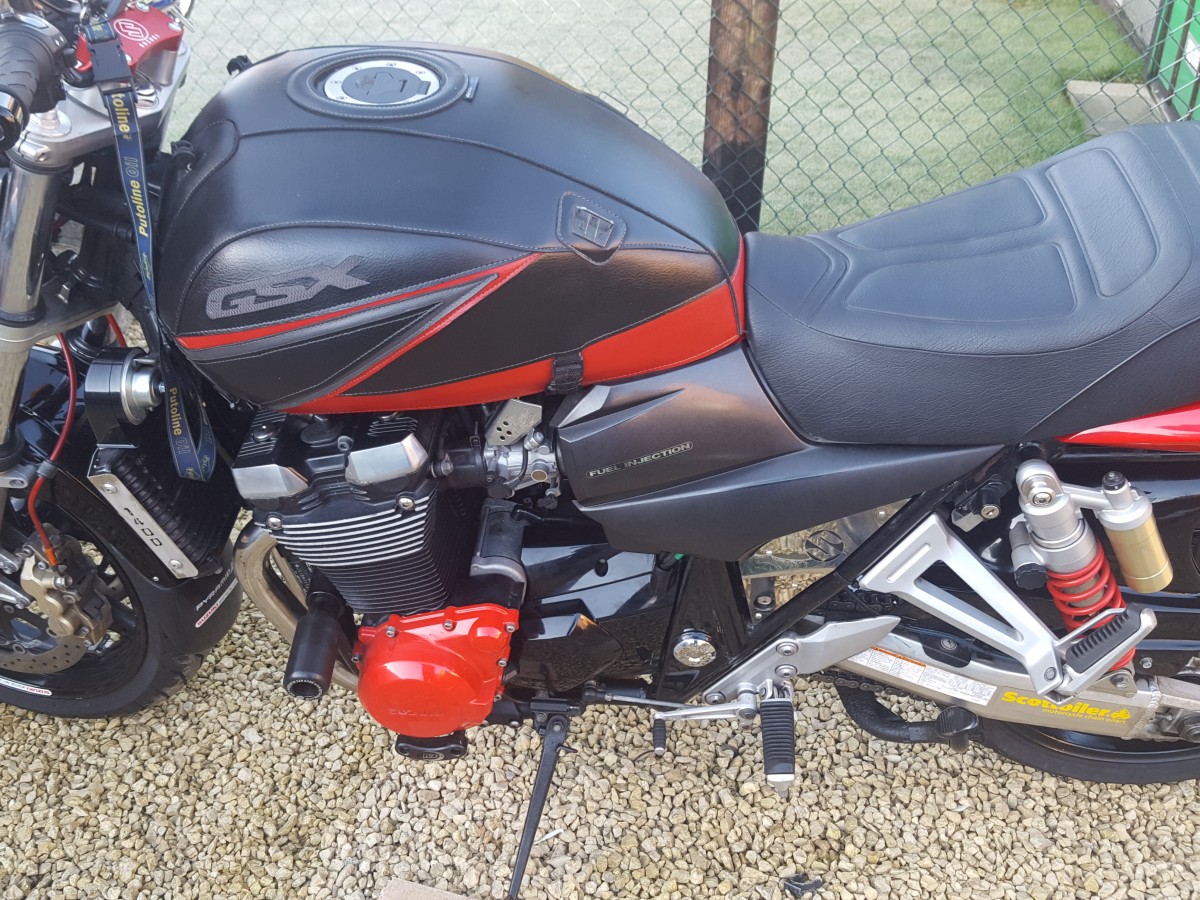 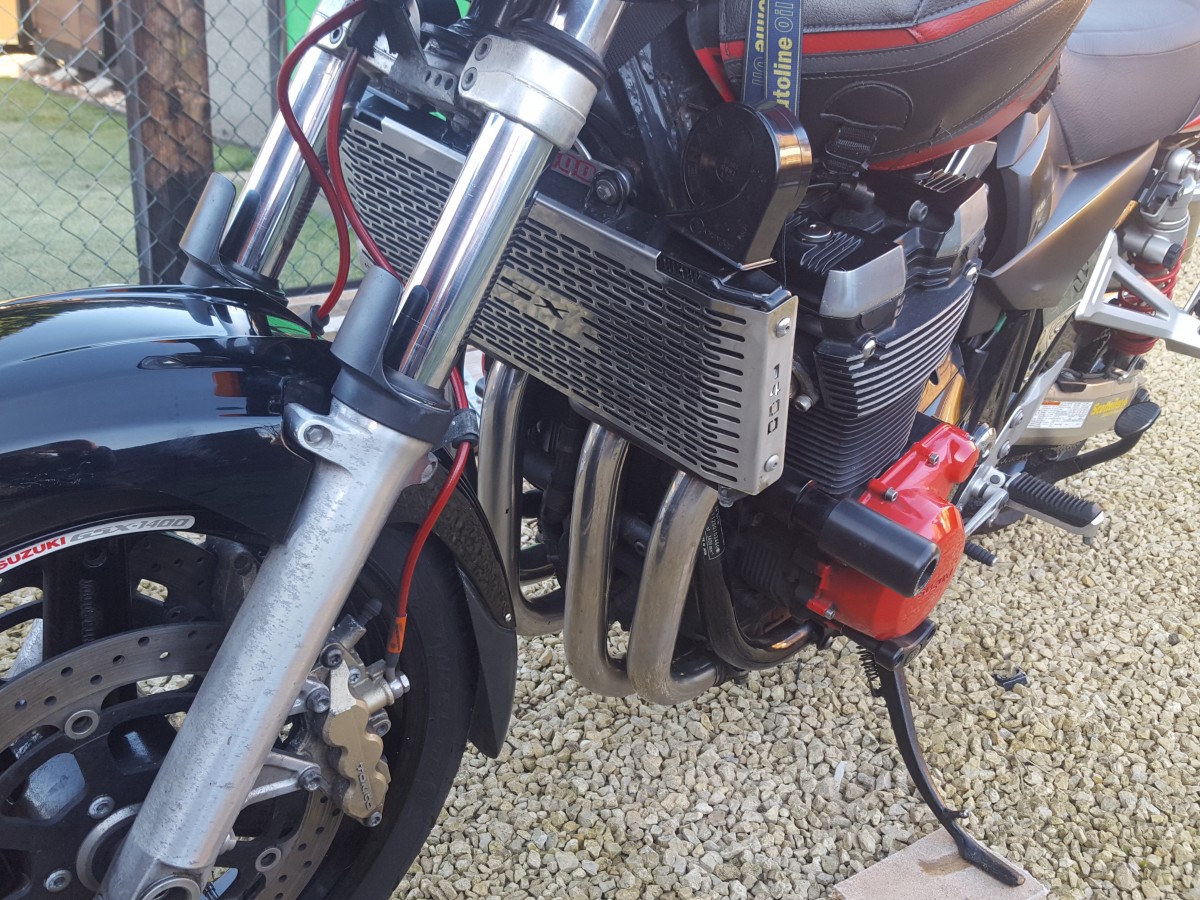 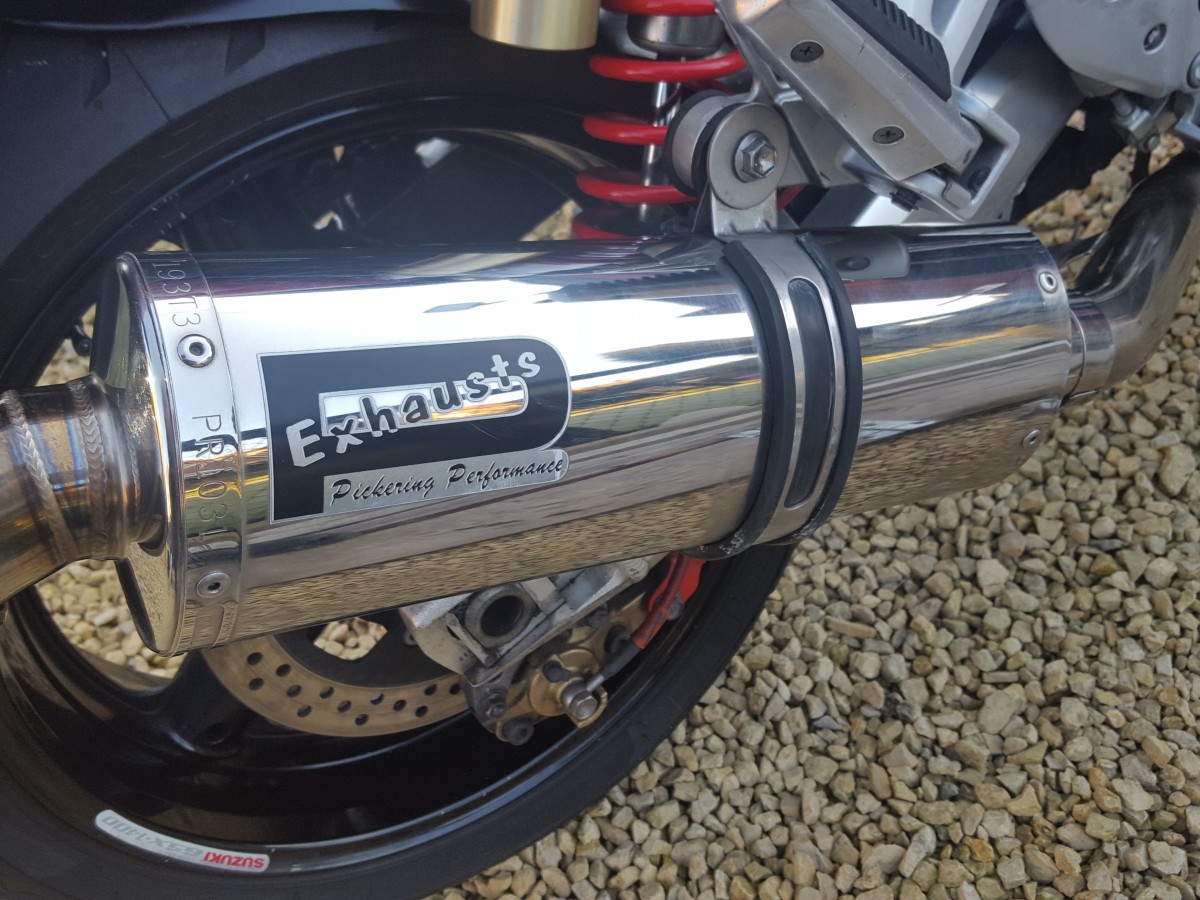 WOW .. THESE 1400s ARE LEGENDARY ! THIS COMES WITH AFTERMARKET CAN ( ORIGINAL SUPPLIED), BRAIDED HOSES, RADIATOR GUARD, BAGLUX TANK COVER, SCOTTOILER, CRASH BOBBINS, R&G CASE SAVERS, DUAL DINALI WINDTONE HORNS, EXTENDER FENDER, HUGGER, FLY SCREEN If big is butch then Suzukiâ€™s GSX1400 is really butch. Itâ€™s not so much a retro clone of bikes gone by but is actually a remnant of times when naked bikes were all the rage â€“ or rather all that was available. Not just because of its big tank, big seat, upright seating and wide handlebar silhouette but also from the way it handles. The twin rear shock and soft forks hark back to wibbly-wobbly 1980â€™s handling and is all the better for it. Riding a GSX, hard or in a regular sort of way, is seriously satisfying in getting from A to B because it is what it is: a heavy, wide-barred muscle bike with a seriously grunty engine. An enormous sense of pride and well being washes over you in the knowledge the GSX14 is one of the biggest capacity air/oil-cooled bikes on the street â€“ and youâ€™re on one and own it. As for the handling, a pair of Metzeler belted tyres, Ohlins rear shocks and revalved forks help no end, to the point you can up corner speed and lean angle quite safely. This is good because the footpegs get butchered by tarmac on the standard suspension settings. At least you can enjoy yourself doing so without overly taxing the brain and right wrist. Thereâ€™s a massive hit of torque hidden in that engine but it makes a welcome and strong appearance with throttle use anywhere below 6000rpm. For instant overtakes there isnâ€™t much that can touch a GSX14. No need to boot down a gear or two, simply open the throttle. The gearbox is typical Suzuki in the way it clonks from first to second but then the rest drop into place without so much of a scuff on your upper left boot. Life with a GSX14 is good. Itâ€™s a good drawing board to tailor the bike to suit by way of bellypan, different handlebars and other non-tacky touches. Thereâ€™s a ruck of accessories still available, and Suzuki themselves carried decent parts like crashbars. Suzuki junked the 4-2 exhausts system after a year or two in favour of a 4-1 exhaust. This doesnâ€™t reduce the impact of the Suzukiâ€™s size. The GSX14 also begs for a little bit of light tuning by way of 4-1 aftermarket sports exhaust and a Power Commander or Yoshbox retune of the fuel injection and ignition timing. (THIS HAS BEEN DONE) This pays dividend with an even more responsive throttle.

Terms & Conditions
Cash Price £4495.00. Total Deposit . Total Amount of Credit . Payments of . Duration of Agreement is . Fees of £1.00 are included in the payments shown. Total Amount Payable is . Annual Fixed Interest Rate of %. Actual rate will be adjusted to include the deferred final payment. APR %.
Finance is provided by Motonovo Finance, One Central Square, Cardiff, CF10 1FS. This is not a commitment to lend and applications are subject to an underwriting decision.

MotoNovo Finance limited. Registered in Wales under Company No 11556144. Registered Office: One Central Square, Cardiff, Wales, United Kingdom, CF10 1FS. Authorised and regulated by the Financial Conduct Authority. Indemnities may be required in certain circumstances. Finance is only available to UK residents aged 18 or over, subject to status.Terms and Conditions apply. On a PCP product you do not have to pay the Final Payment ONLY if you return the vehicle at the end of the agreement, you have paid all other amounts due, the vehicle is in good condition and has been serviced in accordance with the service book. Excess Mileage charges may apply along with other terms and conditions, which will be contained within the finance agreement.

We need to talk about Electric Vehicles. Unless you've been living in a cave recently, you'll h...

Adventure bikes seem to be very much in vogue at the moment. Perhaps it's down to the recent two yea...

Gary Birtwistle and Paul Young take the 1-2 slot for Royal Enfield at the opening round of the 2022...

Back in the early 1950s the Benelli Leoncino was born. Sporting a 125cc engine, it became a massive...

When it comes to road-legal 125cc dirt bikes and supermoto's, there isn't much to choose from these...

Dueruote article on the new Italjet Dragster and interview with Massimo Tartarini.

English translation of the Dueruote article on the new Italjet Dragster and interview with Massimo T...