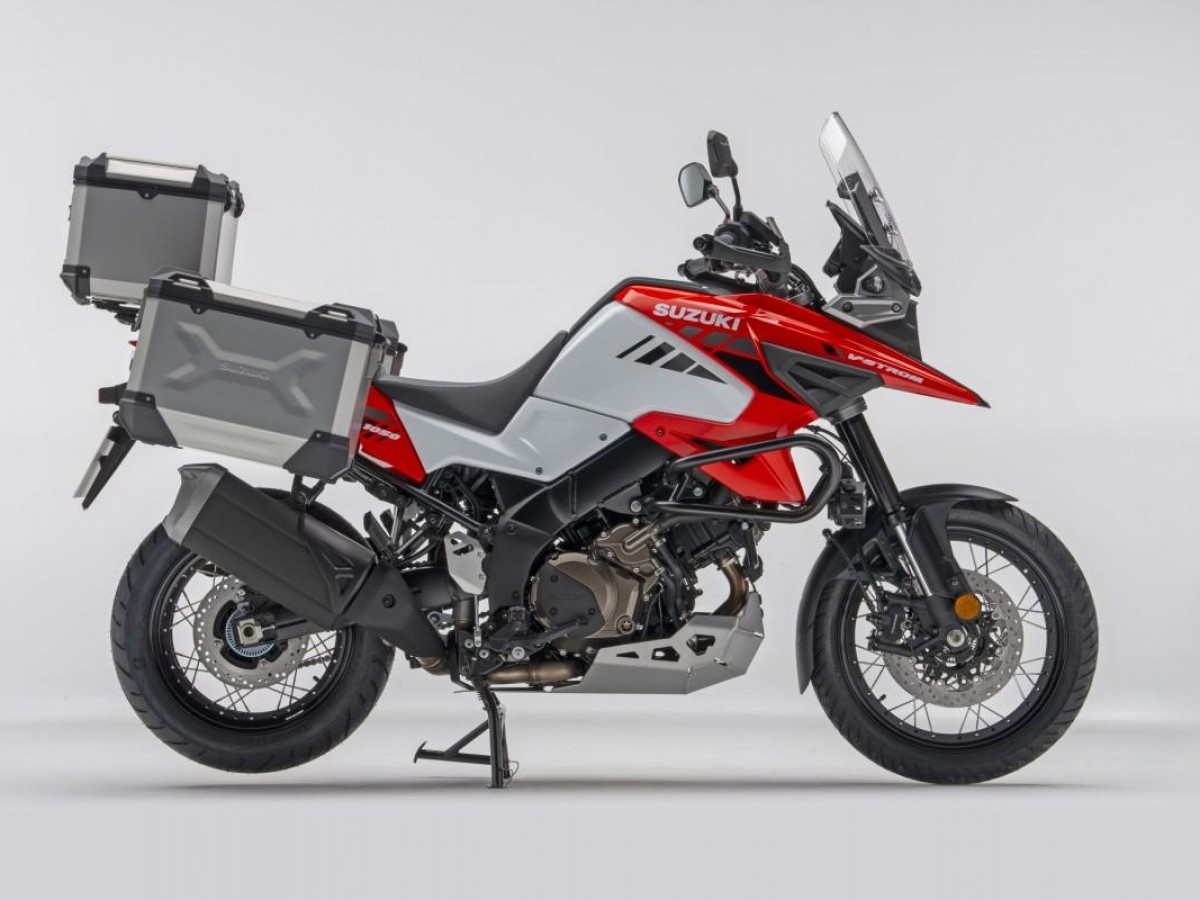 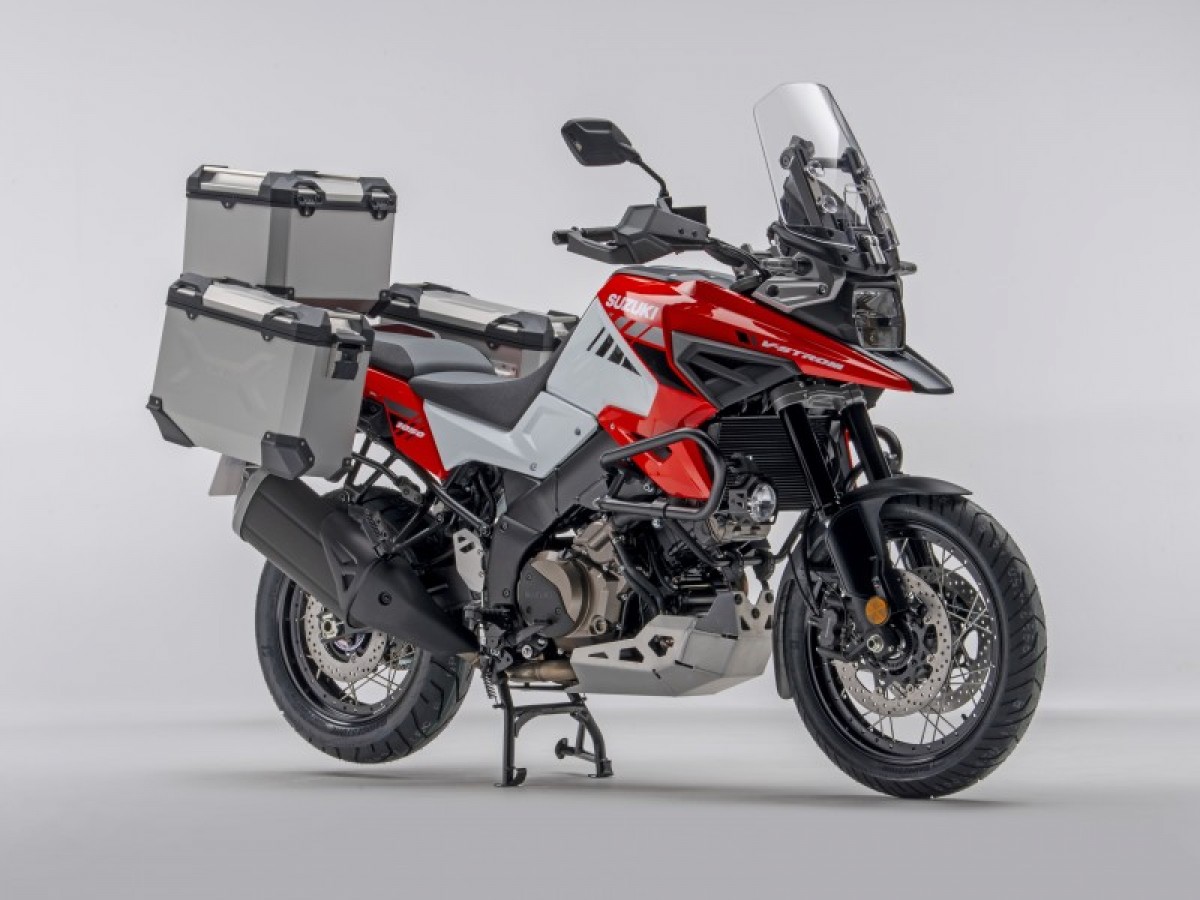 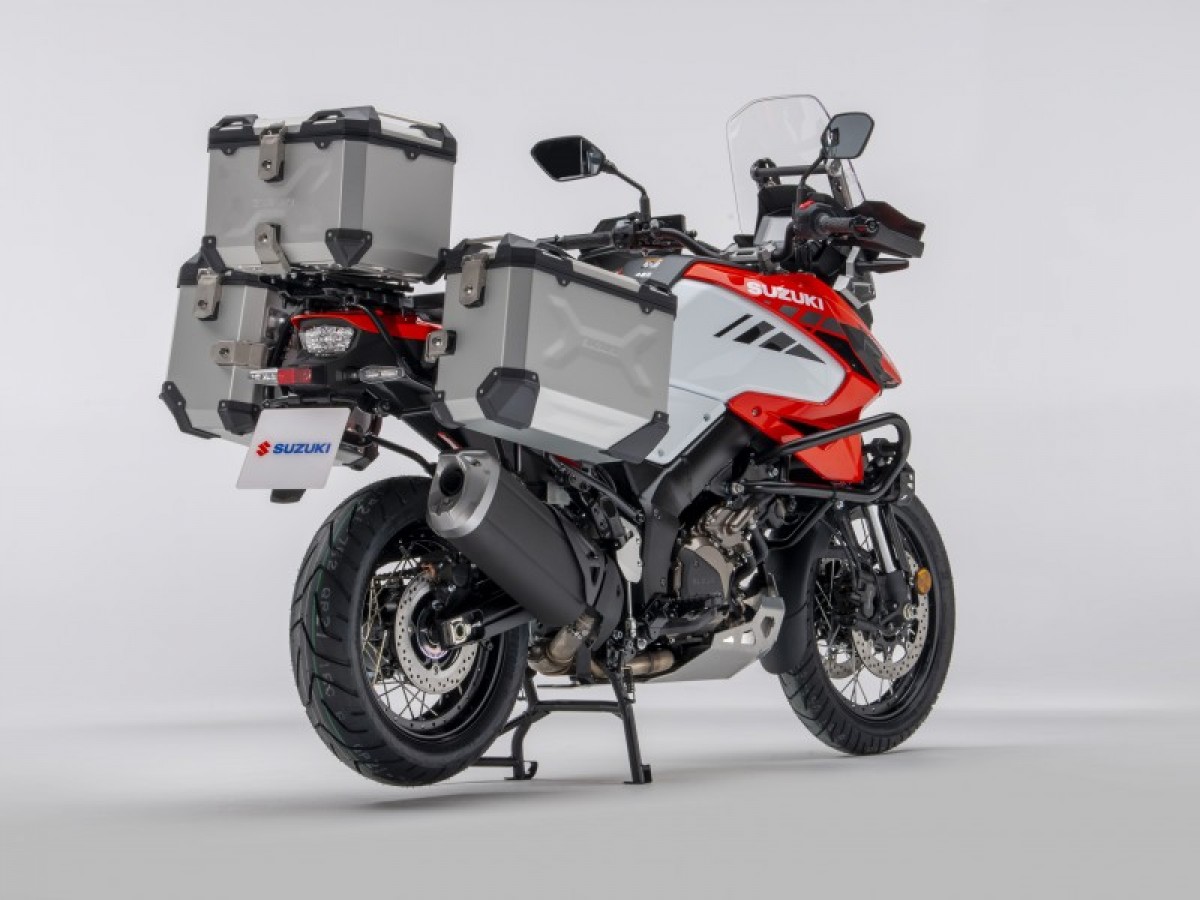 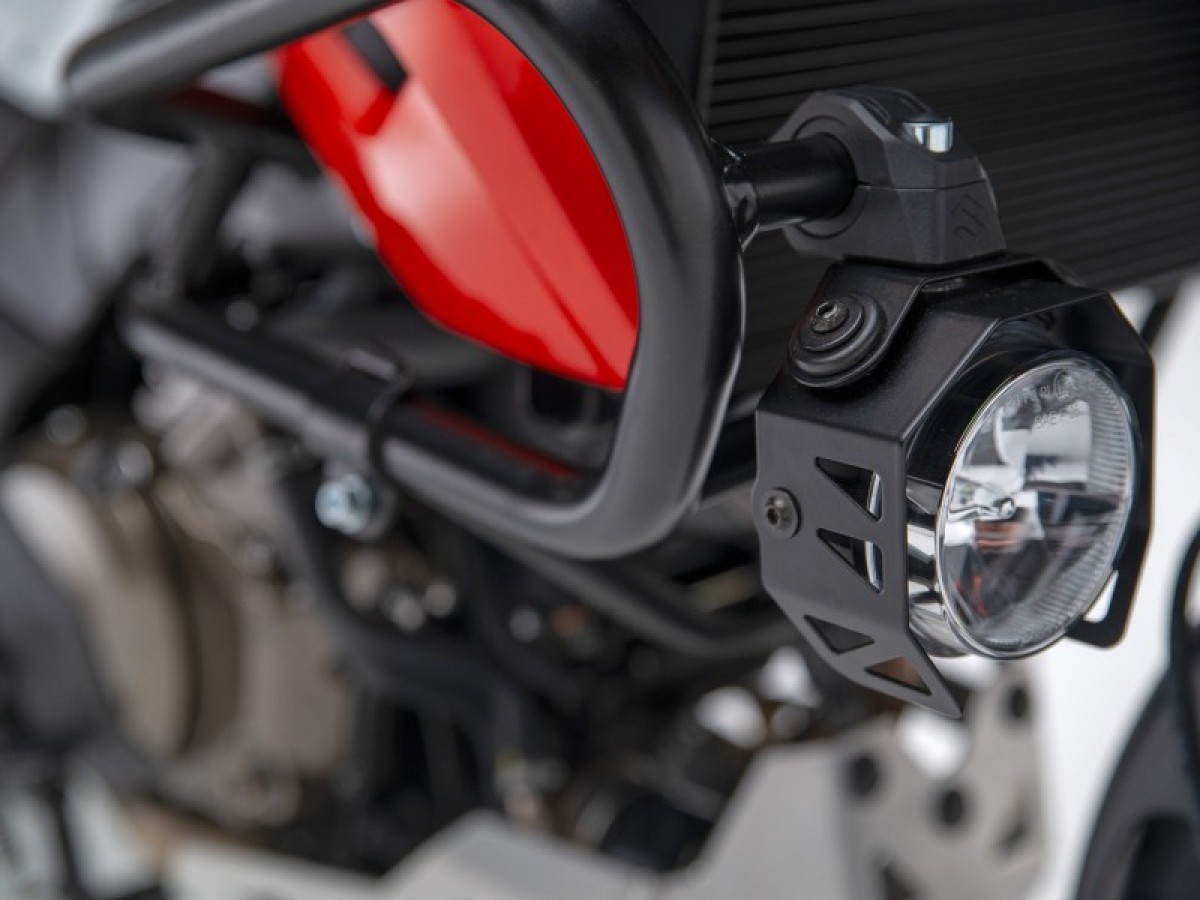 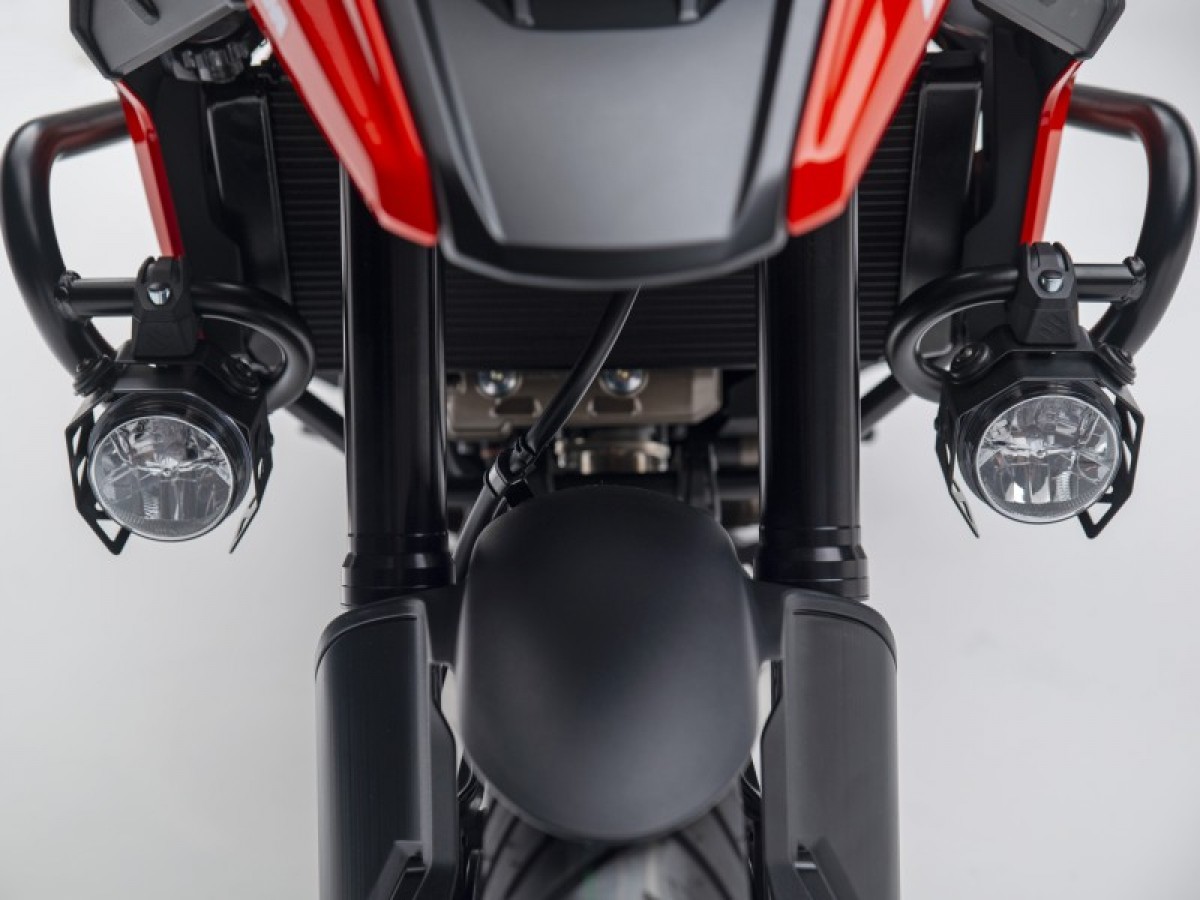 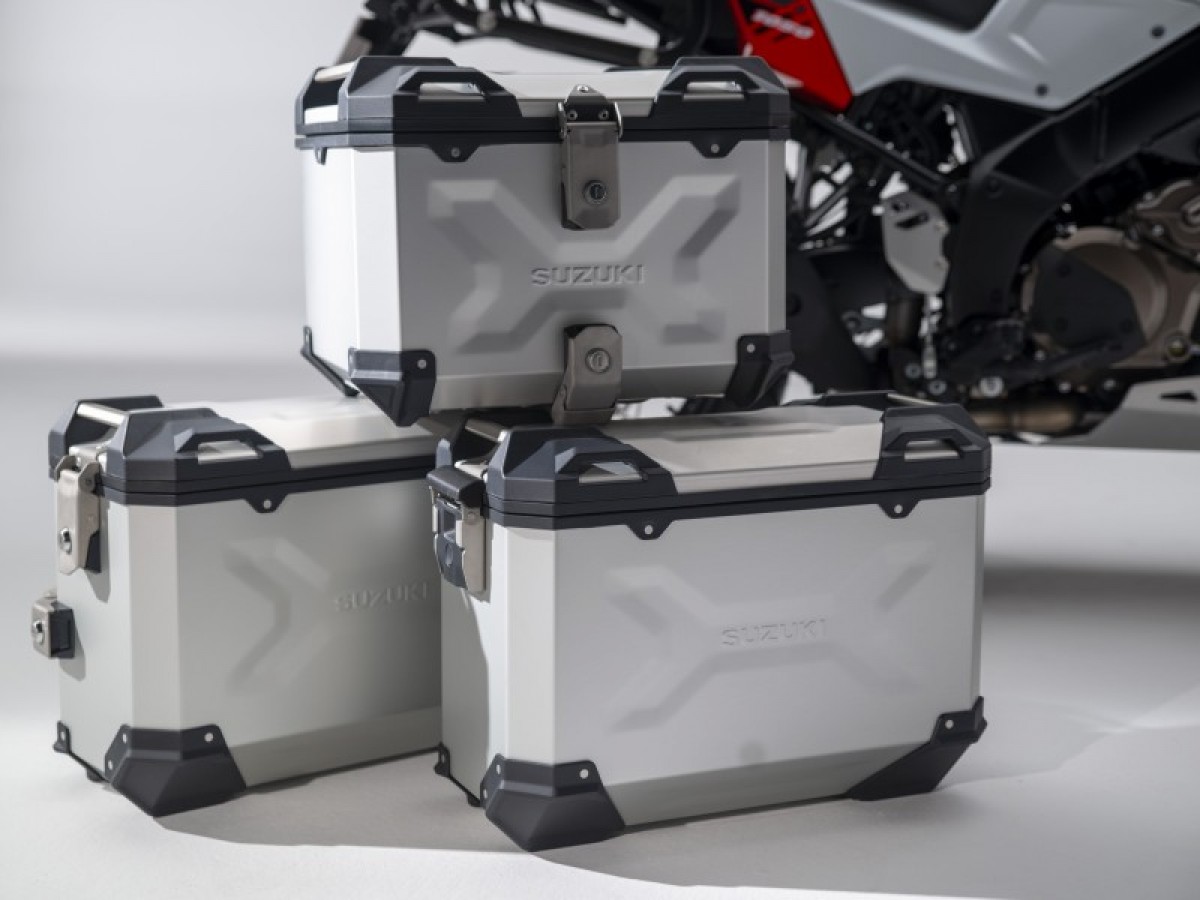 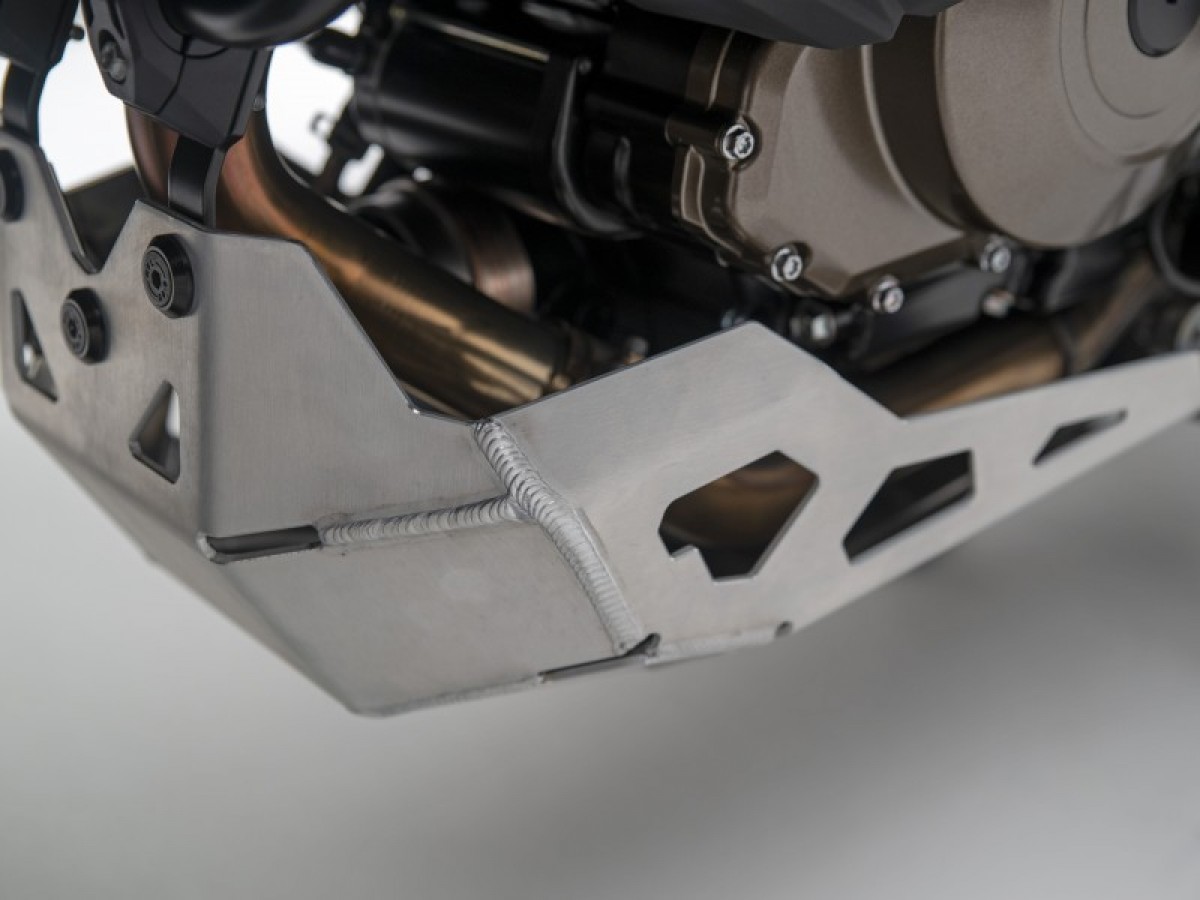 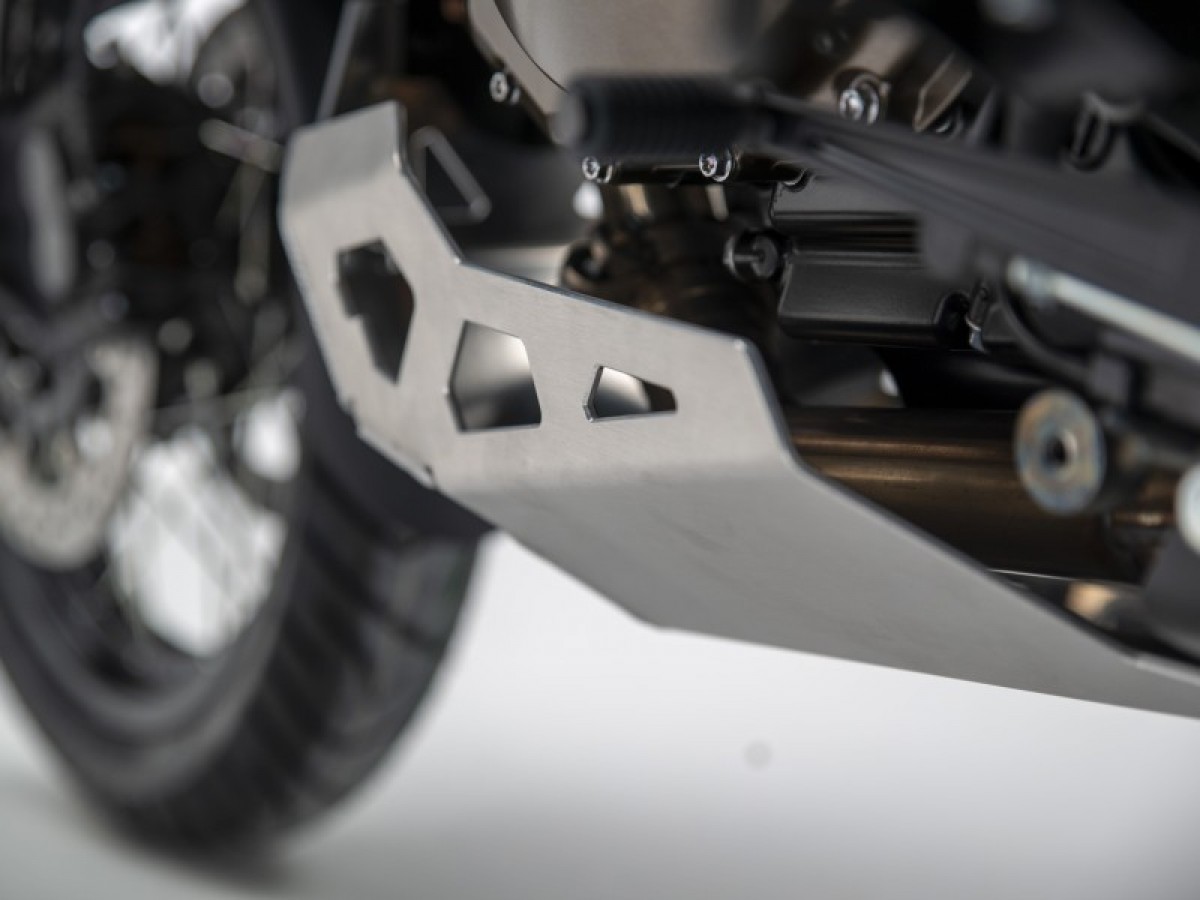 DL1050 Explorer, Includes Aluminium top case, Aluminium side case set, Suzuki heated grips, LED Fog lamps, Aluminium Skid Plate, Accessory bar. • Design heavily influenced by Suzuki’s iconic DR-Z desert racer and DR Big, with a new vertically stacked rectangular LED headlight and distinctive ‘beak’. • New Euro5 version of the flexible and characterful 90° V-Twin engine producing 107.4PS (79kW), a 7% increase over the previous generation. • New ride-by-wire throttle with three selectable engine modes and a three-mode traction control system • The flagship V-Strom 1050XT gets new Suzuki Intelligent Ride System (SIRS) which features a full suite of electronics including an inertial measurement unit (IMU), lean-angle sensitive ABS with two settings, linked brakes that can detect and adapt to load and inclines, plus hill hold control and cruise control. The new V-Strom 1050XT was designed and built to allow any rider to maximise their own adventure, wherever it may take them. V-Strom 1050XT Electronics The V-Strom 1050XT is equipped with a comprehensive electronics package and uses the new Suzuki Intelligent Ride System (SIRS), which is aimed at enhancing everything from rider comfort to performance and practicality. A new ride-by-wire throttle delivers a natural and linear feeling, while slow speed riding is aided with a more stable idle. The ride-by-wire throttle is part of a wider Controller Area Network (CAN); an interconnected information network that replaces standard wiring, with the benefit being fewer wires and faster data transmission. Also part of that network is a new six-direction inertial measurement unit (IMU) from Bosch. This compact unit monitors pitch, roll, and yaw based on lean angle and acceleration. Information from the IMU helps govern Suzuki’s updated Motion Track Brake System, which includes lean-angle sensitive ABS. The system also automatically applies pressure to the rear brake to help controlled deceleration when front brake pressure rises to a certain degree. The system supports the rider, should they suddenly brake mid-corner, helping them to continue on the intended line with minimal kickback at the lever. Riders can select from two ABS modes, depending on the surface and riding conditions. The V-Strom 1050XT’s Motion Track Brake System also includes slope-dependent control, which optimises pressure across the front and rear brakes to maintain control and avoid rear wheel lift under heavy braking downhill, and load-dependent control, where the ABS unit constantly learns changes in deceleration through the input of hydraulic pressure as the load increases or decreases, when riding with luggage or with a pillion. The system remembers the optimal relationship between the deceleration and hydraulic pressure. The system also features hill hold control, which means the brake is automatically applied when stopped on an upward slope to prevent roll-back and aid easier starts, especially when laden with pillion and luggage, and rider comfort during long-distance touring is further taken care of with the addition of cruise control. A three-mode traction control system replaces the previous two-mode system. It can also be turned off. Riders can also select from one of three engine modes, which alter throttle response while still delivering the same peak power. The new V-Strom also gets the latest versions of Suzuki’s low RPM assist and easy-start function. Styling While unmistakably V-Strom, the new design is a thoroughly modern take on the styling of the legendary DR-Z race bike and DR Big production machine. The beak - now synonymous with adventure bikes - was first seen on the DR-Z, and the new design further highlights the association but with a more aggressive and standout image. The shape of the fuel tank, too, apes the design of the DR-Z. The colour options of the V-Strom 1050XT in particular pay further homage to the ‘desert express’ and highlight Suzuki’s rich racing and adventure heritage. It comes in a similar orange and white to the original DR Big, while a yellow version links to Suzuki’s motocross and off-road pedigree. The handguards, which come as standard, are re-designed and are more angular and rugged, while the mirrors are also new. Careful thought went into the finish of the V-Twin engine, with new bolts completing a look that sees the cylinder heads, clutch cover, alternator cover, and water pump case finished in a classy bronze. Completing the striking new look is a new vertically stacked rectangular LED headlight plus LED tail light and LED indicators. Engine and performance The new Euro 5-compliant 1037cc, 90° V-Twin engine in the V-Strom 1050XT puts out more power than the outgoing V-Strom 1000, with peak power up by 7% to 107PS, while it maintains its easy-to-use, flexible character and strong linear drive. This is achieved with reprofiled intake and exhaust cams, with increased lift duration a

Terms & Conditions
Cash Price £13794.00. Total Deposit . Total Amount of Credit . Payments of . Duration of Agreement is . Fees of £1.00 are included in the payments shown. Total Amount Payable is . Annual Fixed Interest Rate of %. Actual rate will be adjusted to include the deferred final payment. APR %.
Finance is provided by Motonovo Finance, One Central Square, Cardiff, CF10 1FS. This is not a commitment to lend and applications are subject to an underwriting decision.

MotoNovo Finance limited. Registered in Wales under Company No 11556144. Registered Office: One Central Square, Cardiff, Wales, United Kingdom, CF10 1FS. Authorised and regulated by the Financial Conduct Authority. Indemnities may be required in certain circumstances. Finance is only available to UK residents aged 18 or over, subject to status.Terms and Conditions apply. On a PCP product you do not have to pay the Final Payment ONLY if you return the vehicle at the end of the agreement, you have paid all other amounts due, the vehicle is in good condition and has been serviced in accordance with the service book. Excess Mileage charges may apply along with other terms and conditions, which will be contained within the finance agreement.

Petrol Motorcycles Sales To End By 2035 Today as part of the Government's transport decarbonisati...

We need to talk about Electric Vehicles. Unless you've been living in a cave recently, you'll h...

Adventure bikes seem to be very much in vogue at the moment. Perhaps it's down to the recent two yea...

Gary Birtwistle and Paul Young take the 1-2 slot for Royal Enfield at the opening round of the 2022...

Back in the early 1950s the Benelli Leoncino was born. Sporting a 125cc engine, it became a massive...